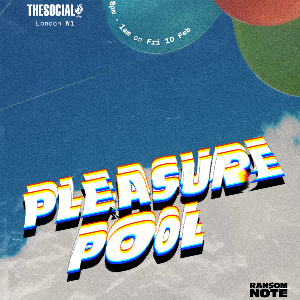 Ransom Note kick off a new monthly party at The Social inviting friends and special guests to join them in the basement with a focus on live music.

The first edition of the party see's the gang invite Pleasure Pool, a crew of party starters from Glasgow who have just released their debut album 'Love Without Illusion' via the acclaimed Optimo Music.

This will be the group's debut London show, a rare chance to catch an exclusive intimate performance from one of the most exciting underground groups in Leftfield Dance and Electronic music as they channel influences from 80's New York, Disco not Disco, Post Punk, Acid House and beyond.
Grab some friends and dress to sweat.

On the night Ransom Note will be taking over two floors of music with support from Ally Tropical, Matt C and Carl Gosling.