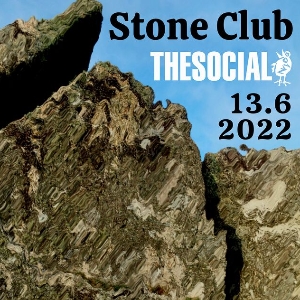 Stone Club 13th June
Stone Club is back again at the Social, taking you on a mysterious journey to the Stone Circles of the British Isles through mythmaking, folk stories, poetry, and tunes!
Stone Club was formed as a place for all stone enthusiasts to congregate, to muse and most importantly to stomp to stones.
Featuring
Justin Hopper & Sharron Kraus
Swift Wings: Victor Neuburg’s Sussex poems
The poet, publisher & occultist Victor Neuburg is best known for his early relationship with Aleister Crowley and, later, for ‘discovering’ Dylan Thomas. But in between, from 1920-1930, he published a string of eccentric and beautiful books from the British counterculture. For Swift Wings, psych-folk musician Sharron Kraus has composed new music for a selection of his Sussex landscape poems, performed by Kraus and writer Justin Hopper as a follow-up to their Ghost Box Records album Chanctonbury Rings.
Richard Norris

Richard Norris has a deep and broad history spanning decades of dance and electronic culture. Electronic Sound magazine calls him “the electronic musician’s electronic musician’, whilst Time Out New York referred to him as an ‘unhinged sonic magician’.In recent years, Richard has concentrated full time on a series of ambient and deep listening releases on his Group Mind label.

Melanie Xulu (founder MOOF magazine) will be hitting the decks and djing her eclectic mix of psychedelic and underground vinyl.

The Folk Archive was founded in 2020 as a tool to help researchers, artists, writers and performers immerse themselves in Folk costumes, customs and lore. The Folk Archive is run by Lally MacBeth, an archivist, researcher, writer and artist.
Stones Of Kernow
A film by Matthew Shaw featuring the ancient sites of West Penwith in Cornwall. Matthew Shaw is an artist, composer and producer. Atmosphere of Mona, a book of poetry and photography was published by Annwyn House in 2020 In 2021 Matthew worked with Shirley Collins & Brian Catling on Crowlink.