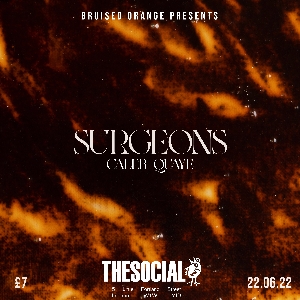 'Surgeons are a London based band formed by cousins Jack Laver and Oscar Rawlinson, alongside drummer Liam Toon and bassist Joel Dent.

Following the release of their debut single 'While it rains' in 2021, the band return with their follow-up 'Hellhound', released on 27th May.

Combining powerful synth soundscapes, melodies and gritty and compelling riffs, their refined alt-rock songwriting takes an atypical approach from what you might expect. Their choice of sound palettes and production techniques is what is truly setting this band apart from their contemporaries.


Come and join the guys to celebrate the release of their second single, with support from Caleb Quaye and an after party hosted by Pet Deaths DJs!'