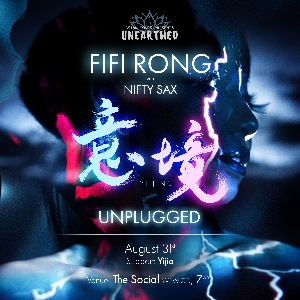 Unearthed: A new live music series spotlighting British Asian artists is back, with performances from Fifi Rong and Yijia, who explore and infuse their Chinese heritage into their respective sounds. Fifi Rong, in collaboration with NiftySax (Milo Lombardi) will be giving us a rare unplugged set. Join us for an evening of discovery and genre bending sounds.
Fifi Rong: Music was once an impossible dream. But now, it’s my calling to bring my Chinese Heritage infused Avant-Pop music onto the world stage using the power of NFT and help as many other independent artists to make a sustainable living from their passion along the way. Having chosen to be a full-time independent music artist, FREEDOM is my top value in every sense of the word. That means CREATIVE and FINANCIAL FREEDOM. Music NFT makes it possible, and I want to show you how. With no middlemen and no filter, I blend Avant-Pop, Alt R&B, Ambient Electronica and dark UK underground sounds with a tint of Vermilion in my blood.
Yijia: A singer-songwriter from China interested in exploring her cultural identity and diverse traditions through music-making. Yijia has attended 'Sing My Song’ at the age of 16 and launched her music career as a singer-songwriter in China. Yijia went on to win the 16th Chinese Music Awards for ‘Media’s Choice Album’ and gain a nomination for ‘Best New Chinese Female Artist’. After coming to the UK, Yijia has started an East Asian folk fusion band project - The Sages - who have been featured on BBC Radio 3, Victorious Festival, and Asia House’s ‘One Voice’ documentary series. Endorsed by Arts Council UK as a part of the Global Talent visa scheme, Yijia also holds an undergraduate degree in Music from SOAS, University of London and a Masters in Musicology from University of Oxford.